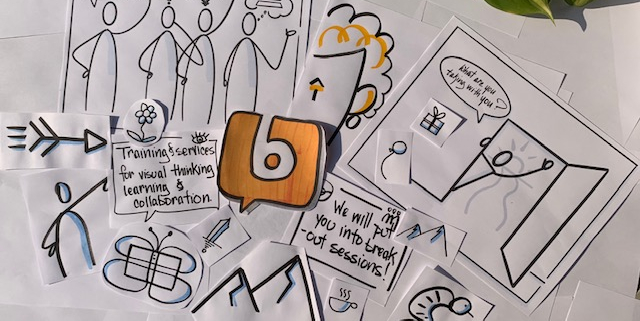 Yesterday, I was part of a grand experiment. Honestly, I don’t do that a lot.

I do a lot of training, facilitation, and coaching. It’s true, I do a lot of experimentation within those events but it’s qualitatively different than what we engaged in yesterday. The experiments that I design within my practice are planned—you might even say controlled experiments, in that they are designed, implemented, and evaluated according to the objectives to be achieved and the criteria I develop (although perhaps the acronym DIE isn’t the most cheerful). I mean, that’s what you would expect from a curriculum designer, right?

Yesterday was different in so many ways:

I have to admit that I was on pins and needles about how it was all going to come together. We were a team of six people coming together from Germany Spain, China, the US, and Taiwan.

In these days of video conferencing, folks getting together from around the world is not exactly a big deal but it turned out we were not only managing time zones, but we were also managing weather patterns which almost disrupted our entire plan as there was bad weather in Spain affecting the connection of our colleague Elena. And then, of course, there was the tech piece—not only were we all using document cameras but we were seeking to use them in new in different ways. While we had two tech sessions and practiced before the event too, I still had a tech glitch then made it challenging for me to participate as effectively as I wanted to, and yet I was still able to contribute.

Perhaps it is one of the things I love best about working with my bikablo buddies. We are transparent about how things are going, we support each other to do the best we can, and we learn every time we get together in an environment of good cheer. 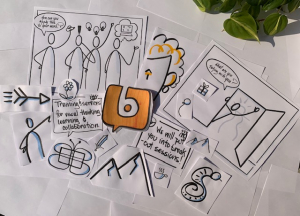 The session was a total blast! We had over 100 people attending of the 200 signed up. We did an extraordinary number of activities in a relatively short period of time, with varying results — and that was OK! Frank, Elena, Xiaoli, and I had a choreographed piece that included movement on all four screens simultaneously. When we first started practicing it, I called it synchronized swimming—it was really just like it. It was so cool! We also

People were delighted to meet in small groups to practice with the technology, or if they didn’t have it, to find other ways to be involved in the activities. Everyone had a chance to post their work on Padlet—to see the work from around the world and to read their comments was exhilarating!

It was a truly amazing experience—one that’s never been done before and no doubt will now be done in the same way and also improved upon—around the world. 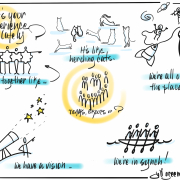 "Use a picture. It's worth a thousand words" 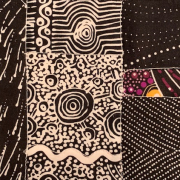 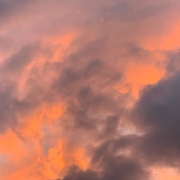 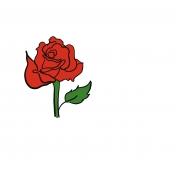 Feedback, critique... What do you think? 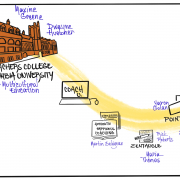 Envisioning the future through reflecting on my past ... which is not to say that past is… 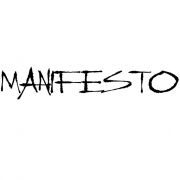 Food for Thought on a Friday Afternoon
0 replies

Want to join the discussion?
Feel free to contribute! 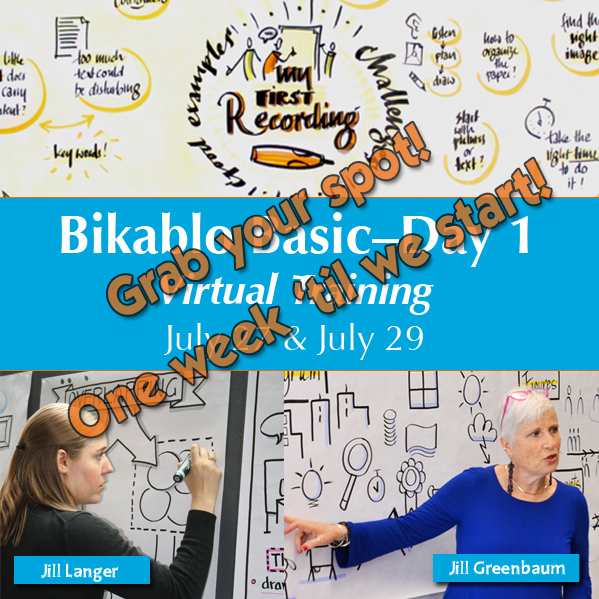 Join me for the Bikablo Basic Day 1 Virtual Training next week!

Jill Langer, my Bikablo colleague in Canada, and I are offering our last virtual session for the summer next week. There’s still time to register and receive the materials in advance of the training. We’d love to have you join us for the learning and the fun!

Here are the details and the registration link. 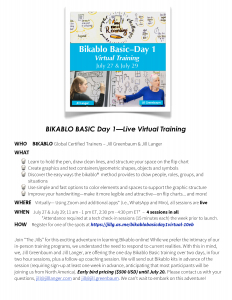 Please reach out to me with any questions that arise. 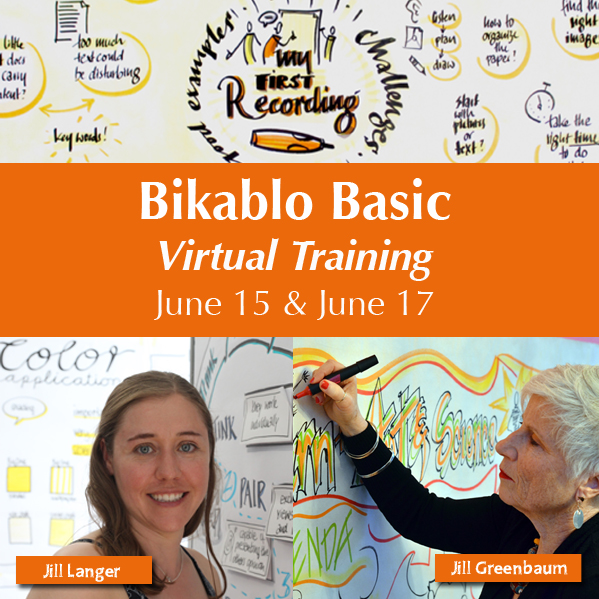 Jill Langer, my Bikablo colleague in Canada, and I had so much fun delivering the Bikablo Basic One Day Virtual program last week, that we’ve scheduled a second for June 15th & 17th! 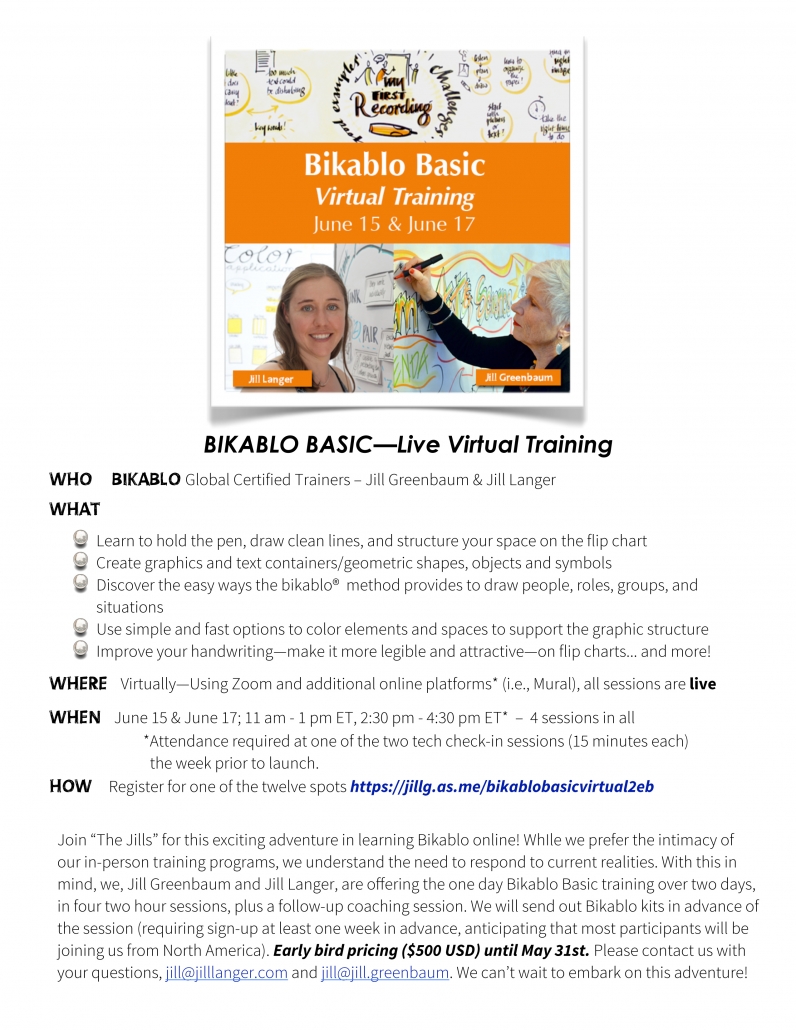 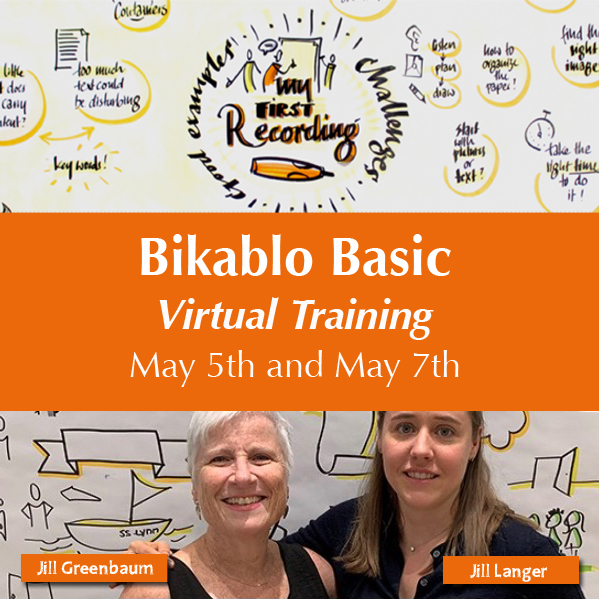 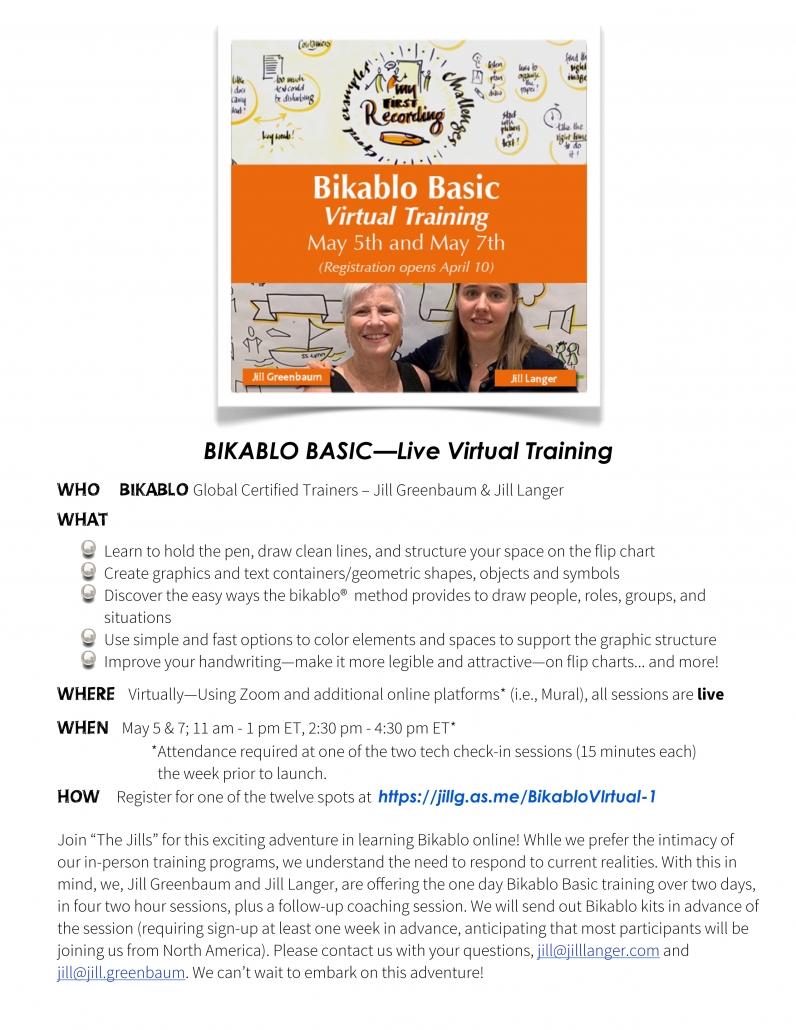 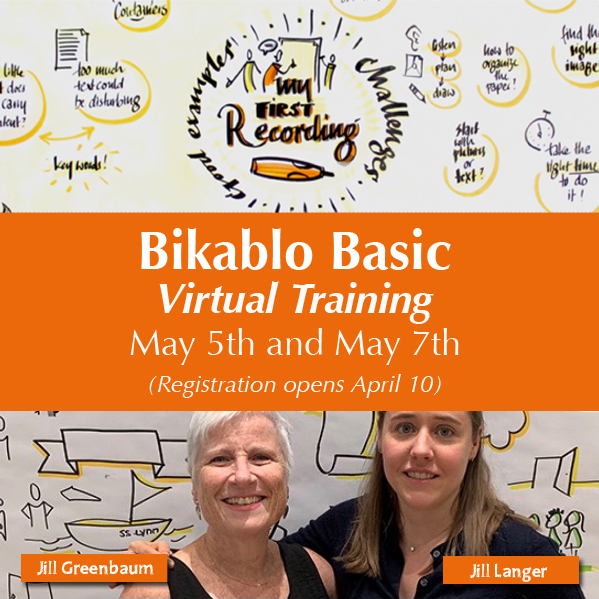 Please contact us with any questions after you have learned the details of the offering. Registration opens tomorrow—space is limited. 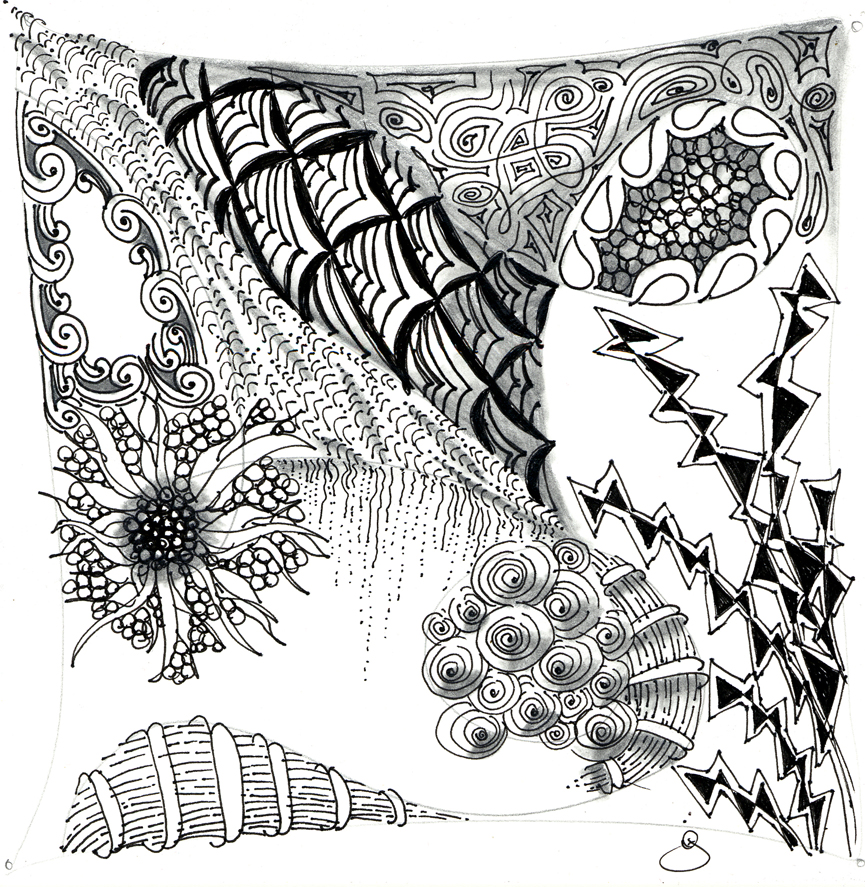 3 Ways to Gather During this Time of Social Disconnection

Every breath you take… affects your heart rate

Did you know that voluntary changes in your breath pattern affect our emotions? Breathing in particular ways can restore balance to our stress response system, calm an agitated mind, and relieve anxiety.

In this free session, we will

Here’s the link for Tuesdays at 4 pm ET 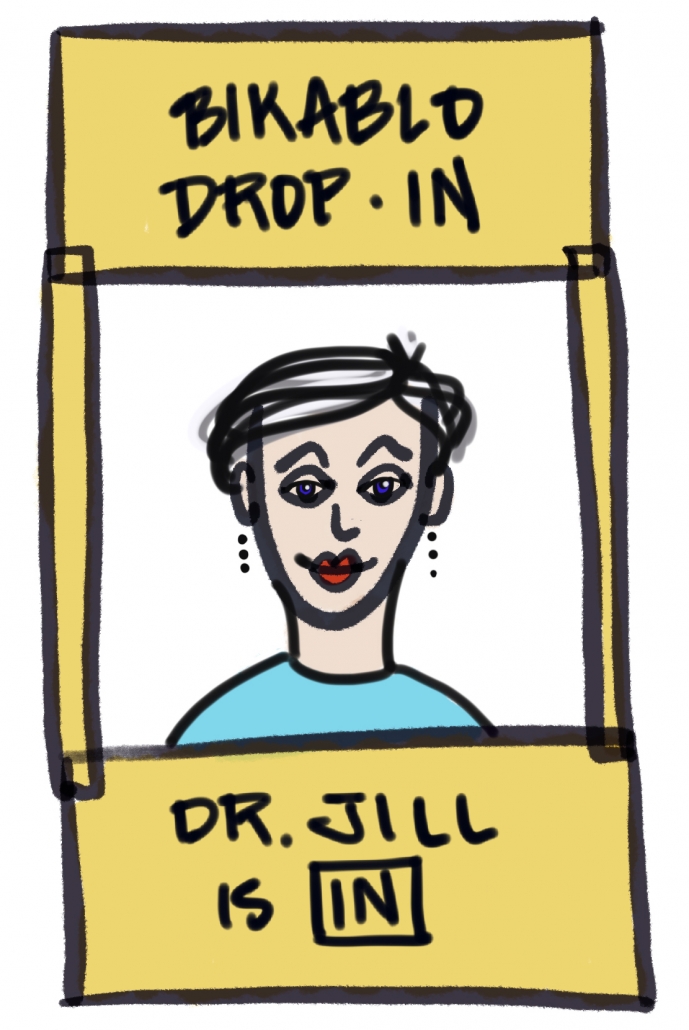 Drop-in Hours—The Dr. is in!

While in India, my colleagues there took to calling me Dr. Jill—which I found quite charming. I reprise it here, with a nod to one of my favorite cartoonists, Charles M. Schulz.

In this freeform “Hour of Opportunity” you are welcome to show up with a question about your work with the bikablo method, ask for feedback on a piece you are developing or have completed, or explore different ways in which to use your skills. You’re welcome to drop in and depart as you wish, or stay for the hour, listening to and learning from your colleagues!

Join me in drawing simple, structured patterns to create beautiful images, in a fun and supportive environment. Zentangle is a meditative art form that is created without planning, and yet follows a series of steps that allows people to experience the benefits of relaxed focus while creating delightful artwork. While I usually teach in person, I am now offering sessions online to communities of which I am a part.

I believe that our current circumstances call for opportunities for nurturing calm, engaging in simple pleasures, creating beauty, and enjoying communal experiences.

Everyone is welcome to become a part of this captivating journey—no artistic experience is necessary. This is the right place to begin—or enhance—your skills. When you sign up, I will share information about the tools that I use—though they are not necessary to your success—and if you really want them, I can send the materials to you for future classes or your own enjoyment. 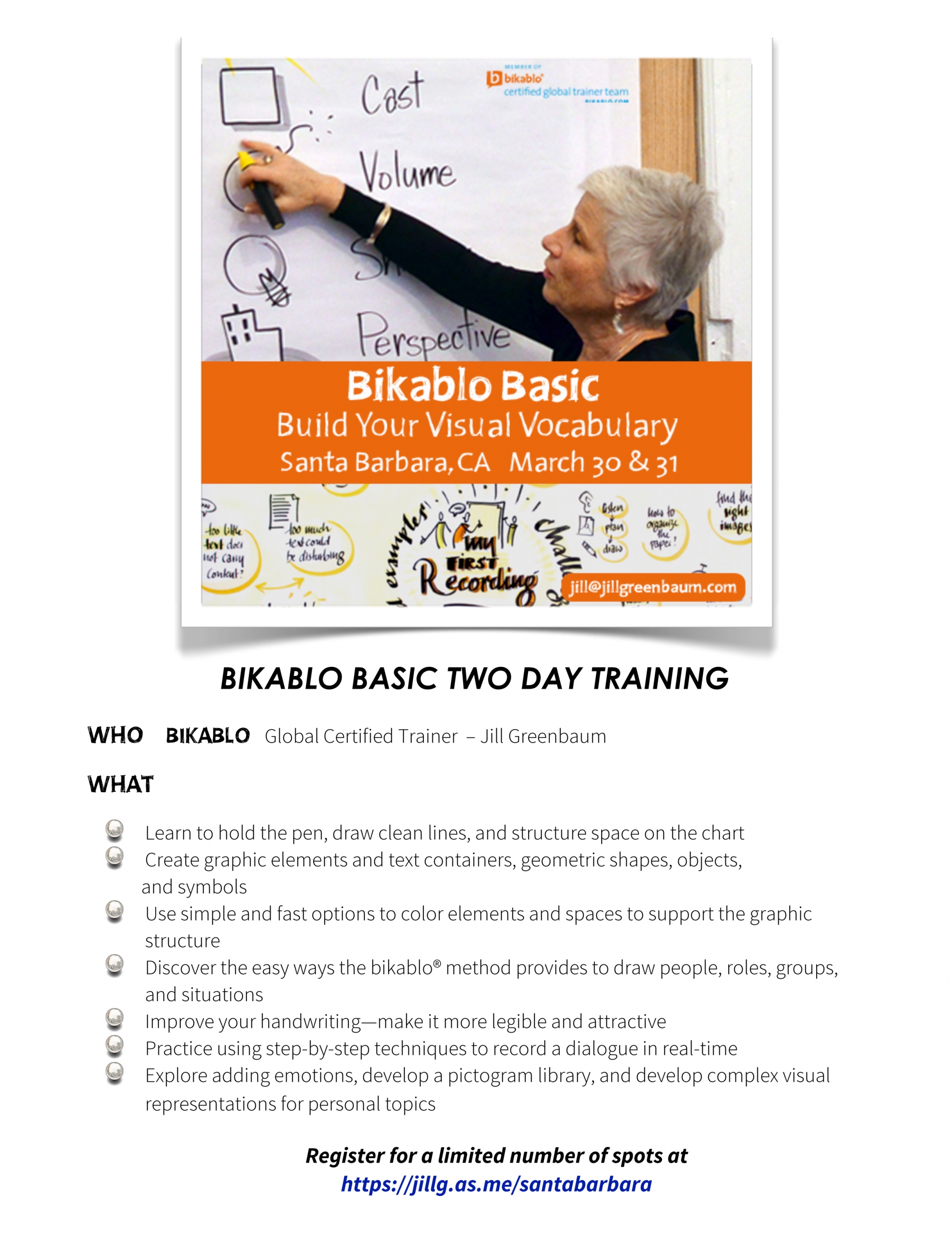 What’s on your PD calendar?

I hope you will join me in one of these fabulous places!

Here’s the link for the March 13th, NYC session…
or, if you fancy the adventure of a three-day creativity conference in Santa Barbara, CA, join me, at the Epic International Summit for the Thoughtsketching, on March 26-28…
or perhaps you’re ready for a deep dive into Bikablo! Come to the March 30-31 Bikablo Basic 2 day training in Santa Barbara

Then again, if you are a part of Agile New England, I’ll see you at the May 7th meeting. On May 8th, I’m offering the Bikablo Basic 1 day training in the Boston area*, and I’m planning for bikablo basics—both one and two day, plus the two-day advanced program in Austin, Tx*!

And, I’m looking at July 10th or 11th, in NYC*, for the bikablo one day basic—if you have a preference let me know! 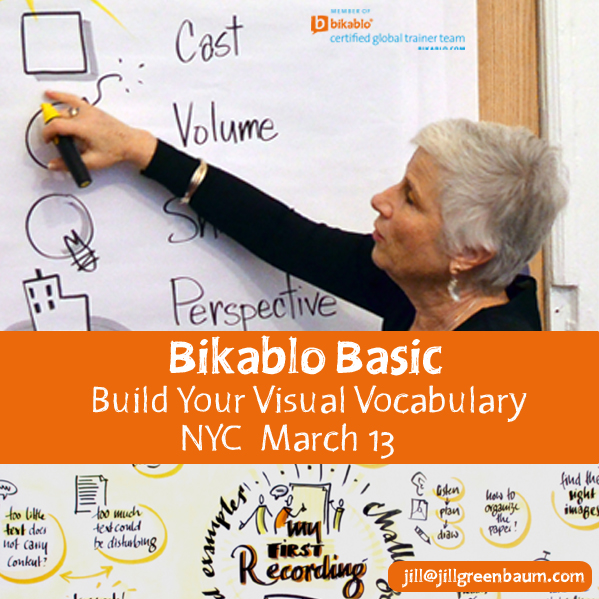 What plans have you made for PD this year?!

I hope you will join me in one of these fabulous places—or online!

Here’s the link for the March 13th, NYC session…
or, if you fancy the adventure of a three-day creativity conference in Santa Barbara, CA, join me, at the Epic International Summit for the Thoughtsketching, on March 26-28…
or perhaps you’re ready for a deep dive into Bikablo! Come to the March 30-31 Bikablo Basic 2 day training in Santa Barbara
If you’re seeking to reinforce your learning or take it to the next level, join the first virtual series, bikablo BOOST! You will get support in applying and integrating the methods you learned into your practice. We’ll meet via Zoom February 6, 13, and 20. (there are a limited number of scholarships available, contact me if you’re interested). 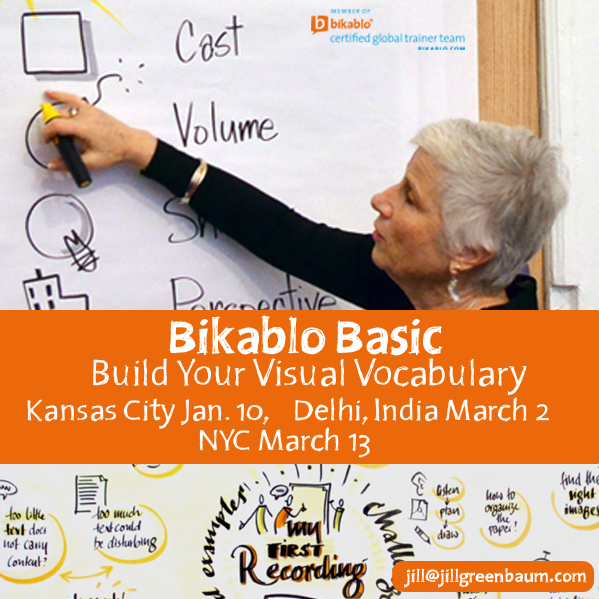 Ready to step into the world of visual thinking?

As I rush to the end of the year, with visions of challenges accomplished and those yet to be explored… I’m excited to share plans for Bikablo training programs in the first quarter of  2020! Here are several of the public sessions on the books—with one to come in California in late March!
Reach out to me with your questions—Here’s the link for the NYC session, and Kansas City has one remaining spot, grab it here! If you’re interested in the Bikablo program in India, contact me, let’s talk, it’s going to be great! 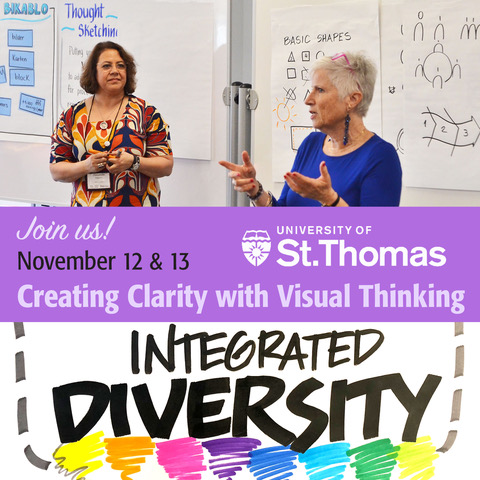 This set of interactive, hands-on learning days will help you develop visualizing skills—using text and drawings—to support building common meaning in meetings, training sessions or strategic off-sites. By developing a basic set of drawing skills, you will be able to capture key ideas and organize them in a visual format, in real-time, creating clarity and alignment for all participating in the dialogue 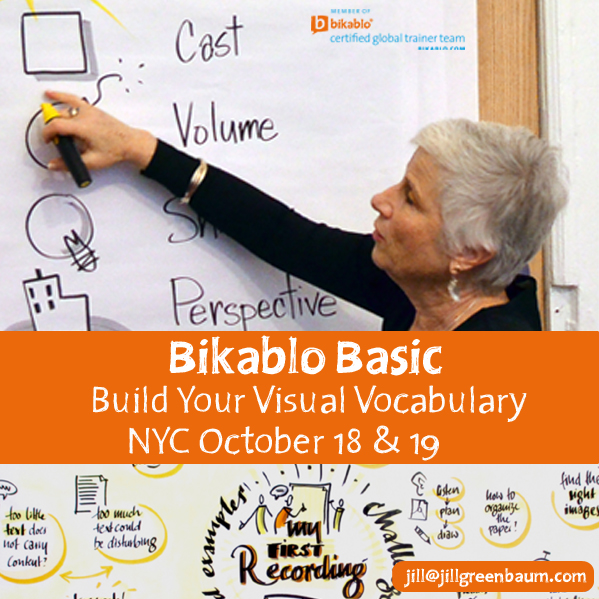 In this 2 day training, we focus on the basics of drawing and imagery in visual language. Join us to discover the basic visual vocabulary and ingredients for visualization with the bikablo® technique.
Learn more here >>

What are your criteria for assessing your work?

How are you growing?
Scroll to top